A refreshing update on some of Puglia’s best beach destinations on CNN travel, mentioning Gallipoli and Porto Selvaggio (that’s actually Nardò!) on the Ionian coastline. We certainly would add Punta della Suina and Baia Verde south of Galipolli, and Torre Colimena north of Nardò, where a small wooden path brings you to an amazing sandy beach surrounded by dunes and a salt lake „Salina dei Monaci“ attracting flocks of Flamingos. Every season has it’s magic. 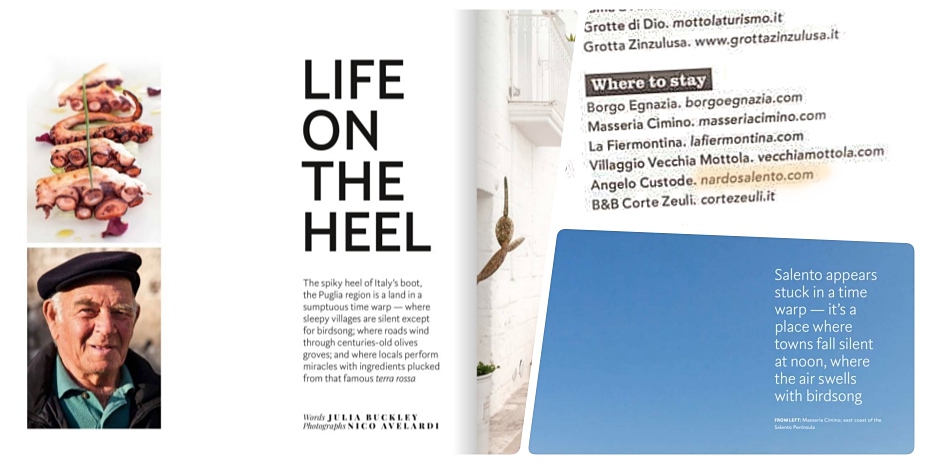 Journalistin Julia Buckley hat im letzten Sommer einen wunderbaren Artikel in NatGeo Traveller geschrieben, wo sie Nardò auf originelle Weise erwähnt:  „…I had thought there’d be little more to Nardò than the baroque architecture that makes it a mini Lecce. But the next morning, Niccolò introduces me to archaeologist Dr Filomena Ranaldo. She tells me about Porto Selvaggio, a nearby natural park whose eight cliffside caves were once home to prehistoric man. Excavations are ongoing and there are plans to open a museum in Nardò showcasing the findings later this year and to run guided tours of one of the caves in 2018. What’s been unearthed so far has been extraordinary. The 45,000-year-old teeth found here point to Porto Selvaggio being the earliest-known home of Homo sapiens in Europe. They weren’t the first to dwell here, though.
The excavations have confirmed that Neanderthals probably lived here as far back as 120,000 years ago. What’s also clear is that this land of canyons and ravines has been inhabited ever since. At Massafra, near Mottola, people still live in cave homes carved out of the limestone…“